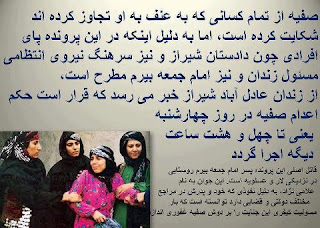 
Safia Ghafoori, ”The Stop Blooding Bride” a 28 years old woman who is going to be executed while her re-judge appeal is been accepted by the Supreme Court.
Nine days ago, Safia Ghafoori, a 28 years old woman who has been imprisoned from 2006 in Shiraz, was supposed to be executed for the third time on her Death Penalty.  But Efforts of philanthropists and the lawyers caused the accordance of the judge for a 10 days delay In order to convince the victim's family to forgive her. The dead end is tomorrow and there is a possibility for her to be executed, if the convincing attempt would be unsuccessful or if the execution will be ordered by the Chairman of the Judiciary.
However, the Supreme Court has accepted to put the re-judge appeal to the case of Safieh but declares that as in this case, the permission of the death penalty has been previously released by Mr. Sadegh larijani, the Chairman of the Judiciary, the acceptance of this appeal is due to, his viewpoint and Full stop execution is just possible regarding his permission .As in Iranian Islamic law system, the Supreme Court is the highest Litigation Authority. So if a case is accepted by this court to be reviewed, automatically the sentence should be fully stopped but in this case, Judiciary head employees announced although the Supreme Court has accepted to review, if Mr. larijani would not order to stop the sentence, the death penalty will be still applicable.


According to Asharq news, after the delay order this young girl has started her efforts to convince the victim’s family but as” her own family” insists on the accomplishment of the verdict, she couldn’t be able to convince the victim’s family for Pardon. Safiye is accused to murder a young girl whom she believed to have relationship with her husband and disrespected her sister. During her first confessions, Safie has said: “we had planned to bring her home in a way that the man who has been my co-respondent, sex her while I register by video. But I fought with her and I pushed her so she felt down and got anesthetized. At this moment my co-respondent has strangled her by his hands so I got the house fire and run away.


After a while, the girl has retracted her confessions and said that she has killed the victim alone but still named the man as her co-respondent.


The so called “Stop Blooding Bride” has been forced to marry to end the longtime Bloody clashes between tribes. During an interview with Asharq’s reporter she explains why her own family insists on accomplishing the Dead Penalty. Actually, this case has many sophisticating points and what you read here is just the charged versions of the story.
How do you pass the days in prison?


How do you see the days of a charged that has to wait to be named by prison speakers to go for her execution every Sunday and Monday? The victim’s family enforces the verdict to be done. This is not called life here.
Why your family wants you to be executed?


I didn’t charge my sister and brother in laws for the case so they could not be able to revenge. They push me to do this and as I don’t, they want me to be executed.


What was the role of these two in the crime?
They had no role. My sister – in law just introduced me the man who was my co-respondent and my brother-in law has actually played no role.


So what is the reason for your family insisting you to charge them?
I was a “stop blooding bride”. My tribe has struggled and fought with their tribe for so many years. There were lots of people killed. They want me to charge them to revenge and be able to start the fight again. I know this so I will not name them. If I do the fight starts again. My tribe will say that your tribe has caused our girl to be imprisoned and so many will be killed again. So I decided to remain in silence. Besides, my husband has divorced me and this was considered a real humiliation for my father who was the chief of my tribe. When I didn’t name my brother and sister-in laws in the court, they gained no excuse for revenge and this made them upset.
Why you killed that girl?
I didn’t want to kill her. I just wanted to take her out of my life. My sister in law introduced me a man and said we can take her home and take a video with his help. My family believes that I have to say that she has encouraged me but this is not true. The young man has a role in murdering but my sister in law did not. So I didn’t want to call his name. In fact I named her during Interrogation but not in the court.
It has been said that your brother has attacked and shut you in prison. Why did he do this?
I was rejected by my family when I was imprisoned so I felt so lonely. My family wanted me dead because I did not do what they wanted me to do. I was struggling to survive and searching for someone who can help me. Then my father’s friend, who was competitive to him, has proposed me to marry him. He is a rich man so has asked the Supervisory judge to aware me about his proposal. He is 30 years older than me and I know I won’t be happy with him but I accepted on the condition that he convinces the victim’s family for Pardon. In the presence of Supervisory judge, he accepted and promised to convince them and even to pay a milliards tomans (Iranian currency) to the victim family. When my father heard this got angry and asked my brother to come in to the prison and kill me. He believes in this way, they (my family) can say we killed her (me) ourselves and free themselves of this disrespect and humiliation.
My brother and I had always a good relationship and he was the only one who came in prison now and often to see me. So I was happy to see him and I walked towards him but he shot me. I was nearly dead and I suffered a lot to get back to life. From that moment I never saw my family again. They want me dead just because I didn’t do as they wanted me to do and also because I tried to save my life recourse me to another person
At this moment you claim that you are not the murderer. Why didn’t you announce it in the court?
I said I had a co-respondent in the court and I introduced him also but as I have mentioned before during interrogations that he had no role in the crime, the court had voted for his Exoneration. It has no importance for the judge to search the reason of not denunciating my brother for shooting the man six times and taking a false identity afterwards instead of accusing him (my brother).
Why you changed your mind while interrogation and said that you did not have any co-respondent?
Some important person came to visit me. These persons were related to the man and asked me not to mention his name. I hoped if I do this, these important people would help me out of this. So I assumed the responsibility of being the murderer.
Why did not you talk to the victim’s family personally to convince them?
I talked to the elder brother who is respected for all. I asked him for Pardon as he knows that it was not me to kill her sister. He said that he knows and believes me and is as sad for me as he was for her sister. He said we can forgive you if your family asks us to do it at least once. I insisted but it served nothing. He just wants my family ask it from them. Then they will forgive.
That means even your mother wants you dead
I love my mother. She is the only one crying for me. She is so sad. But at the same time says that this is your fault not to mention their names and as we can’t revenge, you should be executed.
So your death is the only thing that satisfies your tribe?


If I die, the massacre starts and my tribe will attack my husband’s tribe and people will be killed from both sides. No one can stop them anymore. Both tribes know that I’m innocent and the man has killed the girl. But believe if we name that man there will be an intolerable humiliation. If I’ll be free, I’ll be killed by my own family. So the only safe and immune way for me is to stay in prison but I cannot stand it   any longer
So you think it was a right thing to do to admit your confessions
I got to admit and this caused my exoneration but I cannot tell the truth to everyone as I know my mother will suffer a lot and may die. My father is dead and I don’t know what to do if she dies either. So I just told some part of the truth to my lawyer.